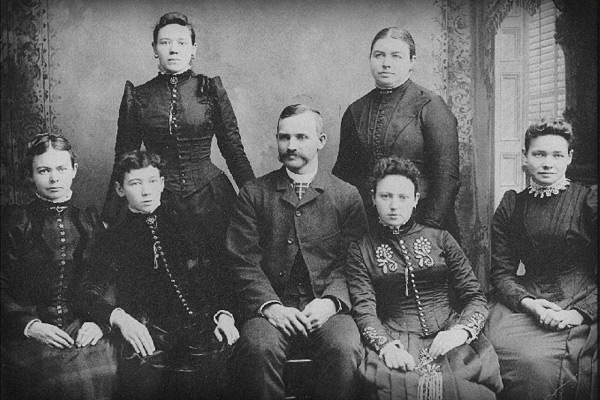 “A small piece of early American history at Mohican Gardens”

John Garst was born in 1820 in Alsace, France. When he was 11 years of age he sailed to New York with his parents. The family initially settled in Pennsylvania, but the parents both died with cholera within days of their arrival in the new world. The five children continued their journey with friends who resided in the same locality with them in their fatherland. John Garst arrived in Jeromesville, Ohio at 15 years of age where he learned the blacksmith trade. Soon after he moved to Mohicanville, where he pursued the trade for others until he was able to begin business for himself.

As years passed, he prospered in his undertaking and became a moneylender, handling large amounts of money for others. In fact he did a regular private banking business for a considerable period, investing extensively in land buying and selling. At one time he owned over 600 acres but gave it to his children for whom he made generous provisions. When he arrived in this county his clothing was made of cheap quality and his actual capital consisted of 3 or 4 dollars. His success proves conclusively what may be accomplished by hard labor and judicial investment.

In politics he held various offices in the Township, yet frequently refused to serve as he cared more to devote his attention to his business affairs than to receive the honor of office. People from all over the States of America wrote him concerning financial advisement and the procurement of money. In business matters his judgment was seldom at fault and his success followed as a logical sequence to his persistent effort. He died in 1904 at the age of 84 years old.

While not a member of a church, he regularly attended the services of the Methodist Episcopal and Reform Church at Mohicanville and contributed very generously to their support.

The farm upon which Mohican Gardens is located was nominated to the National Register of Historic Places in September of 1979. In appreciation of the hard work of those who cared for the land and buildings for more than 150 years, we strive to be good stewards of the John Garst Farm. John Garst Bank Barn Restoration Because we believe that preserving the past enriches the future, we have restored the 1850 Pennsylvania style Bank Barn located on the farm. The plan of restoration was approved by the Ohio Historic Society and National Park Services which allowed us to preserve the integrity of the barn through structural upgrades. At the same time, minor modifications enable us to use the barn for a variety of purposes including gardening workshops, company events, office areas and restrooms.